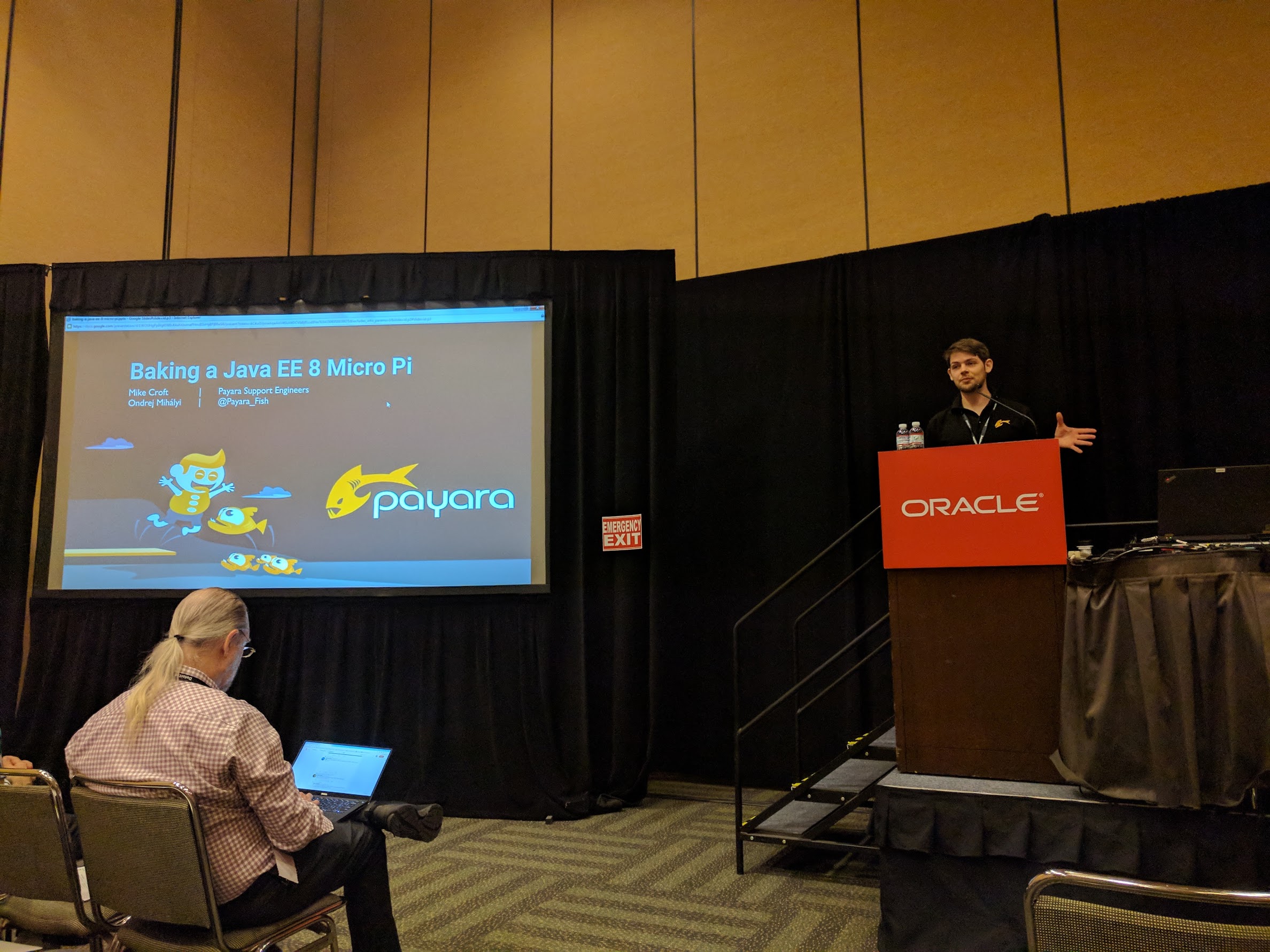 This talk by Payara guys Ondrej Mihalyi and Mike Croft debunked the myth that Java EE is heavy.

Some recent history (to put things into perspective):

Unfortunately, due to technical issues (not from the speakers), they could not do the demo. (I did go down to their booth to see it though). So we went through the code rather.

Some prediction on the future of Java EE - “Look at Microprofile” 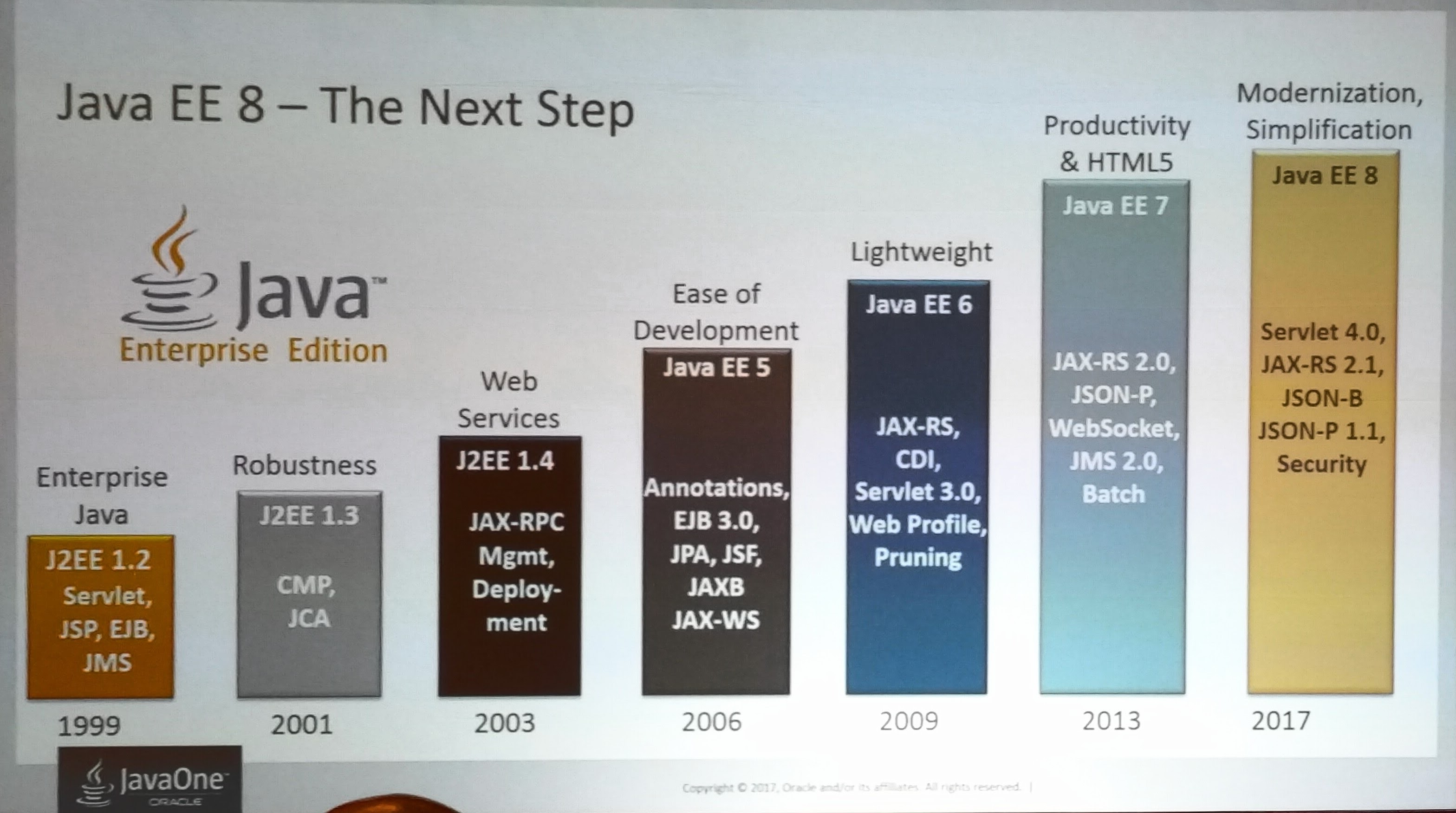 Linda DeMichiel is the spec lead for Java EE and part of many other specs. She gave a high level overview of new features in Java EE 8, that was focus on:

The release of the specification was delayed due to a 1 year hiatus, where some of the spec leads got moved to some internal Oracle work. With the move to Eclipse (EE4J) this should not happen again.

Updated with the following:

HTTP2 Support that resulted in:

(More on this in the next talk)

The Spec split into 3 parts:

This means you can now use CDI in plain Java SE.

The future of Java EE

She then discussed the future of Java EE. More on that later in another talk.

Servlet 4.0: A New Twist on an Old Favorite 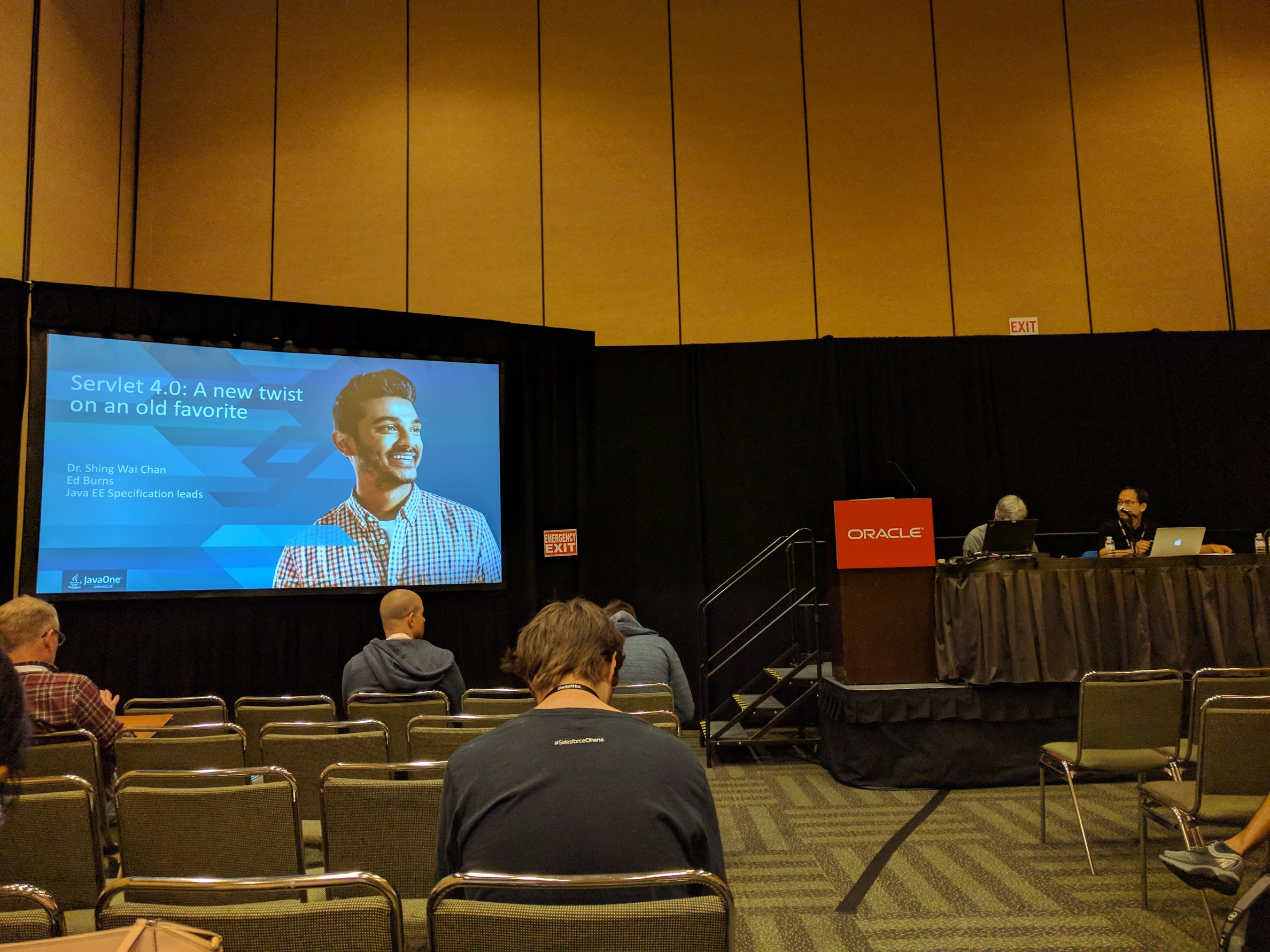 Another new cool feature, Mapping discovery, allows you to discover how the current servlet was reached.

This keynote actually deserves a blog post on it’s own. You can see the video here

Some of my notes: 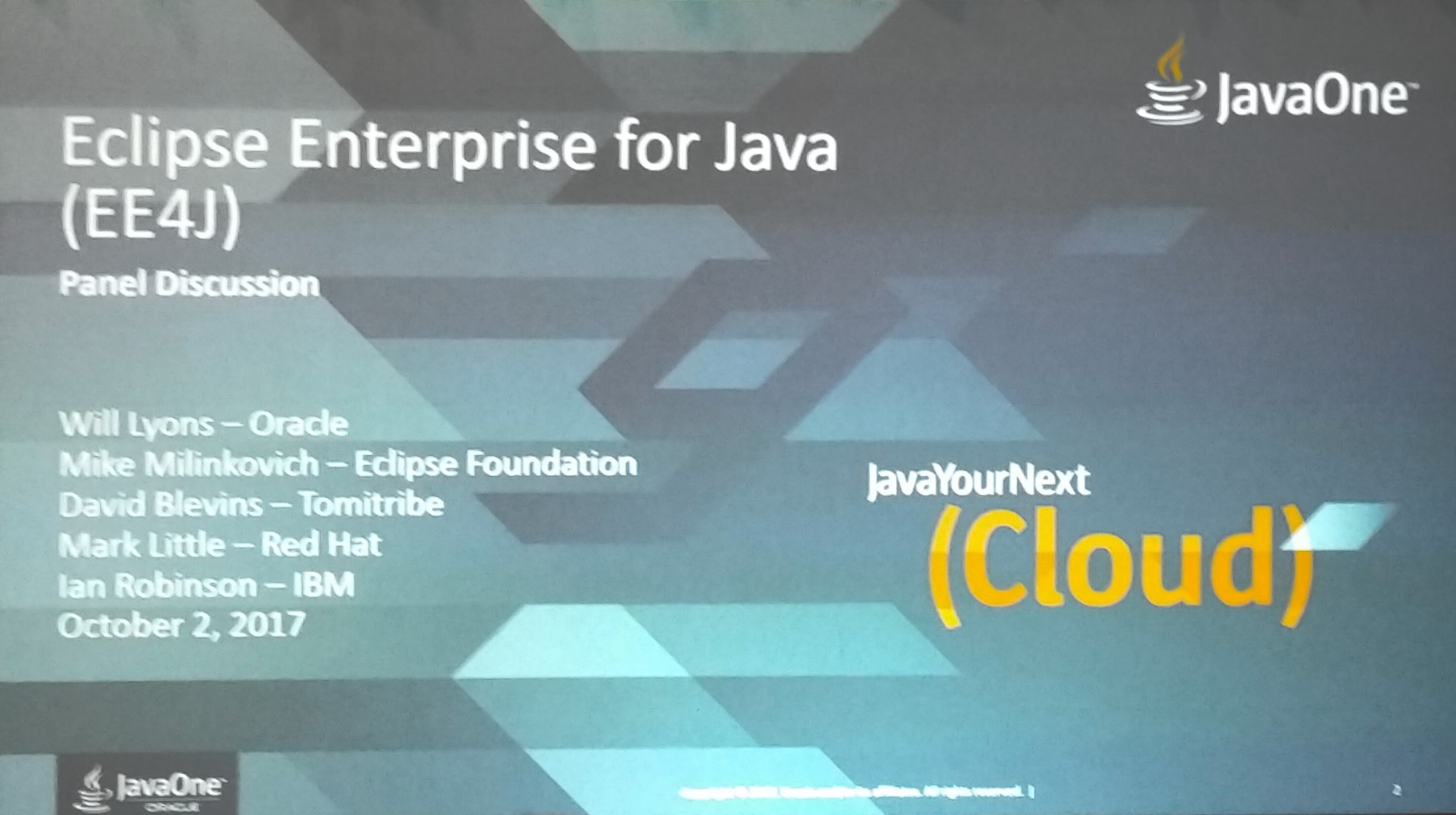 This panel discussed the recently announced open sourcing of Java EE and the move to the eclispe foundation, and the renaming to EE4J.

The Eclipse foundation, with all the vendors, will:

In the future we might see Microprofile be included in this project.

Because the TCK is now accessible to everyone, we might see more implementations. Previously the TCK was a control point (“Pay to play”). Open sourcing it changes the dynamics.

The eclipse foundation is funded by it’s members. see https://www.eclipse.org/membership/exploreMembership.php#allmembers 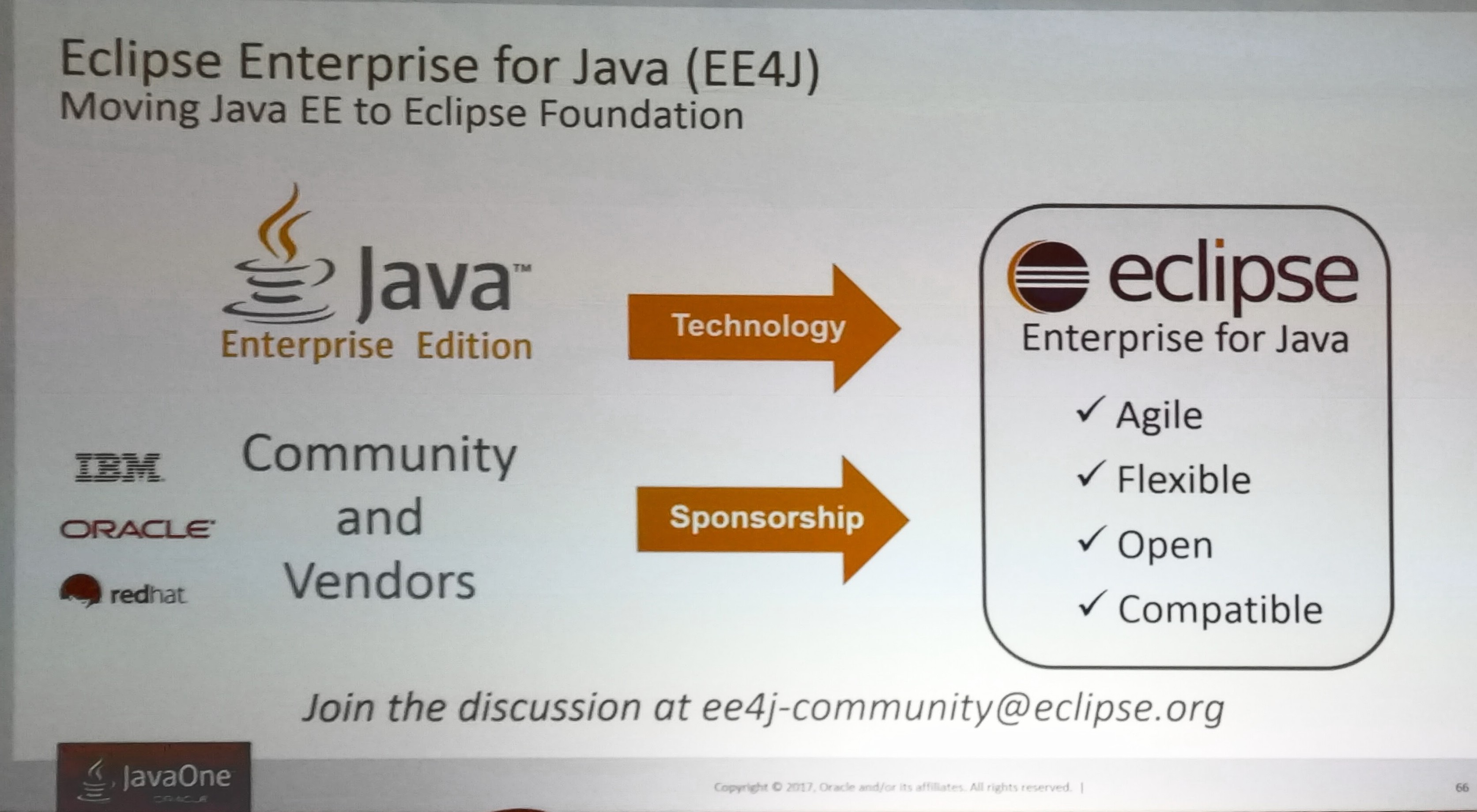 When Should You Look at GraphQL as an Alternative to REST APIs? 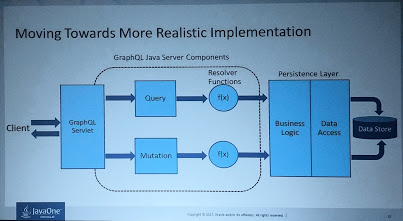 Jobinesh Purushothaman, a published author on REST, discussed GraphQL and when you might want to look at using that rather than REST.

Initially we had RMI, then EJB then JAX-WS now JAX-RS. What is next ?

With REST a client sometimes needs to make multiple calls to get what he/she wants. Example:

You need to explicitly document your REST API with Swagger, OpenAPI or

To control the payload in REST, you typically add query parameters that allow the called to specify what it is looking for, or the client just gets everything and has to filter himself.

GraphQL is a query language for your API, built by Facebook. (It’s got nothing to do with Graph databases)

It’s self documenting and allows the client to query only what he/she is interested in, in one call. Not more over and/or under fetching. Versioning is also not needed when using GraphQL.

We need to seriously look at this !

I then went to the JCP Party on the 38th floor of the Marriott Hotel, where the winners of Duke’s choice awards and JCP Awards were announced. I also got a change to chat to many community leaders and Spec leads.